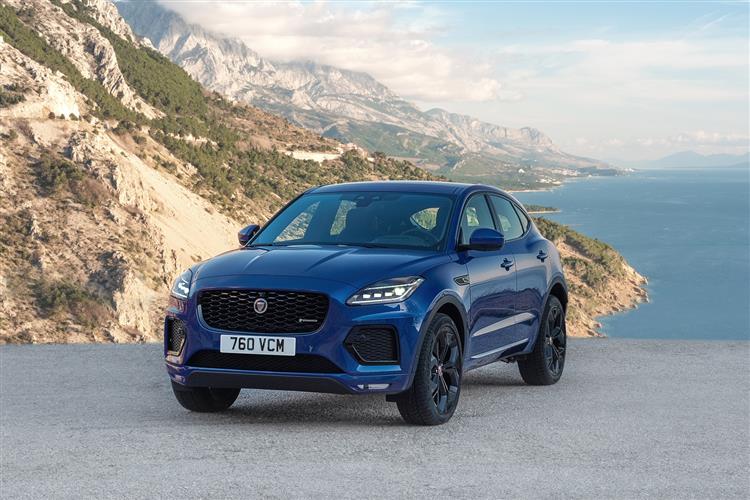 Did you ever think Jaguar would become a brand with sales based mainly around SUVs? It is today. The company's mid-sized F-PACE model introduced the crossover community to the concept of a Jag, but it's this smaller E-PACE that's now this manufacturer's most accessible model. The name suggests an electric connection - misleadingly as it turns out. Jaguar has another SUV - the battery-powered I-PACE - to provide that. Both are cars the company decided it needed but found it didn't have the capacity to build. Hence the need for an agreement with Magna Steyr in Austria, who've been making G-Class models for Mercedes since 1979 and build all the E-PACE variants destined for our market. The car targets the premium part of the SUV 'C'-segment, the compact part of the crossover market aimed at people who need something Qashqai or Ateca-sized but want a posher badge on the bonnet. The JLR business already has a car competing here - the Range Rover Evoque - and, presumably in order to simplify the design process, has based the E-PACE on most of the same engineering used in that model. The improvements that created the second generation Evoque in 2019 have now been carried over to this E-PACE - which has rejuvenated this car's proposition.

Handling of the original version of this model wasn't quite as sharp as we'd expected, so Jaguar's taken steps to improve things, incorporating under the skin the latest stiffer Premium Transverse Architecture structure that the JLR conglomerate has lately built into the Range Rover Evoque and the Land Rover Discovery Sport. As a result, significant improvements in refinement, ride quality and throttle response are claimed. Only the entry-level E-PACE variant - the 163PS 2.0-litre D165 FWD diesel version - uses a non-electrified engine and can be had with front wheel drive and a manual gearbox. All the other derivatives have AWD, a 9-speed automatic and the brand's latest MHEV mild hybrid technology. You can have that 2.0-litre diesel in D165 AWD Auto form; or, with a power hike to 204PS, in D200 AWD Auto guise. There's also a choice of three versions of the brand's 2.0-litre MHEV four cylinder petrol unit, developing either 200PS (P200), 249PS (P250) and 300PS (P300 Sport). The range also now includes a P300e Plug-in Hybrid derivative, which uses a 309PS three cylinder 1.5-litre petrol unit mated to an 80kW Electric Rear Axle Drive motor powered by a 15kWh lithium-ion battery beneath the boot floor. When this is fully charged, up to 34 miles of WLTP-rated all-electric driving range is possible. Whatever your choice of E-PACE variant, you should find on the road that it has very much a Jaguar feel. It's certainly far more of a driver's car than its Land Rover cousins thanks to things like 'Configurable Dynamics' technology that lets drivers personalise throttle, steering and transmission settings, plus the 'Active Driveline' and torque vectoring set-ups are supposed to combine to make this front-driven model fell more like a more involving rear-driven product. All models get a 'JaguarDrive Control' system that gives owners a choice of four selectable driving modes - 'Normal', 'Dynamic', 'ECO' and 'Rain, Ice & Snow'. The optional 'Active Driveline' AWD system can transfer traction to the rear axle in a fraction of a second should a lack of grip demand it.

The E-PACE features a few detail changes in this uprated guise. Revised all-LED headlights with distinctive 'Double J' DRL signatures flank a restyled grille, plus there's a revised lower aperature and smarter side fender vents at the front; and all-LED tail lamps and a smart mesh insert for the bumper at the back. As before, this little Jaguar is based on the same chassis used for the Range Rover Evoque and the Land Rover Discovery Sport. It's around 4.4m in length, so very similar in size to the Audi Q3 that many think will be its biggest rival. It's certainly a lower, sleeker design than that Ingolstadt model, with crisp surfacing, strong rear haunches and a sporty stance. Inside, the main change is the adoption of Jaguar's latest 'Pivi Pro' infotainment system, which sits behind a now much larger integrated 11.4-inch curved-glass HD touchscreen in the centre of the dashboard. Improvements here include quicker activation, the adoption of 'Apple CarPlay'/'Android Auto' smartphone-mirroring, plus a whole range of embedded apps (like Spotify and Deezer) and the potential for over-the-air updates. Complementing this monitor is a 12.3-inch HD Interactive Driver Display, which replaces conventional dials in the instrument binnacle. You can also have a Head-up display; and Jaguar's optional ClearSight Interior Rear View Mirror which replaces the conventional surface of the frameless rear view mirror with a high-definition screen fed from a camera on the roof. As before, the cabin has more in common with Jaguar's F-TYPE sportscar than this little SUV's its F-PACE cousin: there's a 360-degree grab handle for the passenger on the side of the centre console, just as in the F-TYPE, though the dash itself is arguably more futuristic. As on the F-PACE, there's a sports stick shifter, now restyled, with a larger stowage area just in front incorporating room for a wireless charging mat. In the rear, there's reasonably comfortable space for a couple of adults. And the boot is a spacious 577-litres in size in conventionally-engined models, thanks to the integral link suspension system chosen for the rear. That's also enabled the cargo floor to be low and the opening wide.

Prices start at just under £33,000 for the base D165 diesel manual model, but that's a bit misleading because virtually all E-PACE models sold going forward will have the brand's latest MHEV mild hybrid technology, which has to be had mated to AWD and automatic transmission. Prices for these electrified variants begin at around £36,000 with the D165 AWD auto version. Both D165 derivatives can be had with a base 'E-PACE' level of trim, but elsewhere in the range, you'll be choosing between 'S' and 'SE' levels of trim. The petrol models start at around £39,000. All these three spec options can be embellished with an 'R Dynamic' pack that delivers a sportier look, both inside and out. There's also an 'R-Dynamic Black' pack. But you won't need any of that with the top P300 petrol variant because that only comes in a fully kitted-out 'Sport' level of trim. Standard kit levels have of course increased to match this higher pricing. So you can expect to find the brand's latest 'Pivi Pro' infotainment system with its bigger 11.4-inch monitor and a 12.3-inch HD Interactive Driver Display screen in the instrument binnacle. Wireless 'Apple CarPlay'/'Android Auto' smartphone mirroring's also now included. Fresh options include a cabin ioniser, Jaguar's 'Clear Sight Interior Rear View Mirror' technology and the latest 3D Surround Camera tech. And of course the E-PACE features the very latest safety and driver assistance technologies. A stereo camera underpins the advanced Emergency Braking system, which also provides pedestrian detection, and supports the Lane Keep Assist, Traffic Sign Recognition, Adaptive Speed Limiter and Driver Condition Monitor features. Front and Rear Parking Aids are standard on every variant. The camera also combines with the electric power assisted steering system to deliver a Blind Spot Assist function to help reduce the risk of sideswipe collisions on multi-lane roads. A Forward Traffic Detection system also warns drivers of approaching vehicles at junctions where visibility is restricted. Advanced active safety features include a pedestrian airbag, which deploys from beneath the trailing edge of the bonnet to enhance pedestrian protection in the event of a collision.

The introduction of MHEV mild hybrid tech has made a decent difference to the E-PACE's running costs - and, unlike on the larger F-PACE, you can get this electrified tech with the petrol engines too. The MHEV system features a Belt integrated Starter Generator (BiSG) to harvest energy usually lost when slowing and braking. This energy is then stored in a separate 48V lithium-ion battery before being intelligently redeployed to assist the engine when accelerating away, as well as delivering a more refined stop/start system. Let's get to the WLTP-rated figures. The non-electrified D165 manual front-driven model manages 46.9mpg on the combined cycle and 158g/km of CO2. For the MHEV D165 AWD auto variant, the figures are 44.3mpg and 167g/km. As for the otheer MHEV models, well the D200 manages 43.9mpg and 169g/km, the P200 and P250 variants deliver 31.9mpg and 200g/km, while the P300 Sport manages 31.3mpg and 204g/km. That only leaves the P300e petrol PHEV Plug-in hybrid, which as we've said offers a 34 mile electric driving range and has official WLTP figures of 141mpg and 44g/km of CO2. Charging from a 7kW garage AC wallbox can be done from 0-80% in 1 hour and 24 minutes. DC fast-charging (up to 32kW) can reduce this 0-80% fill period to just half an hour. Charge from a domestic 3-pin plug via a Mode 2 cable and the process will take 6 hours and 42 minutes. Whatever E-PACE variant you decide upon, a three year unlimited mileage warranty is standard, although this can be extended with a number a couple of different plans that include a cover for an MOT test failure up to £750, as well as the normal cover for most electrical and mechanical systems. Service intervals are every two years/21,000 miles.

The E-PACE is one of the most significant cars that Jaguar has ever made. It was the first to be manufactured outside the UK. The first to attack the volume part of the SUV market. And the car that has pushed the brand's global annual sales beyond the 250,000 mark for the first time. It's attracted a whole new generation of customers to the company's showrooms and we can see why, combining as it does dynamic Jaguar body language with the fashionable practicality of a compact SUV. and now, we wouldn't disagree. Yes, if you judge it as a Jaguar, there are still questions to ask here. If though, you analyse this model's merit as a compact SUV, you'll find there's lots to like.