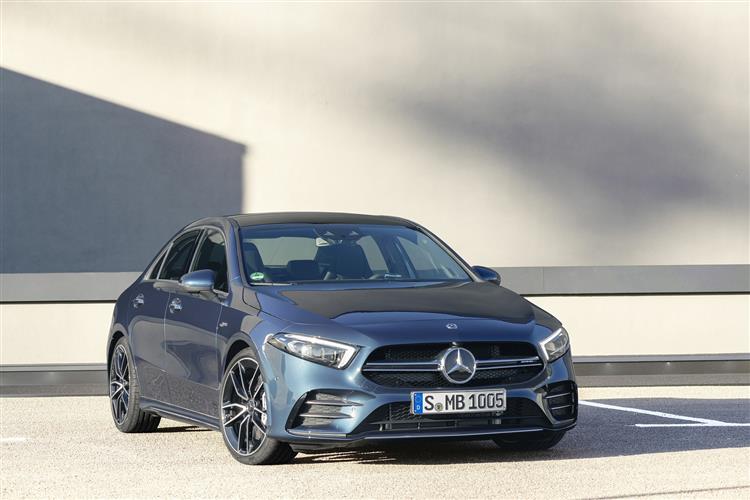 The A 35 4MATIC is the entry-level model from Mercedes-AMG. Here's the Saloon version. Jonathan Crouch reports.

'A35' is a moniker that clearly doesn't mean much to Mercedes but in our market, it evokes memories amongst older car enthusiasts of the old Austin model of the Fifties and Sixties, the van version of which was immortalised by Wallace and Gromit. The 1976 F1 World Champion James Hunt had one and reckoned it was more fun to drive than his company Mercedes. But would he have felt the same way if the Stuttgart brand had given him something like this? After all, who could resist this combination of power, traction and quality? The A 35 is the sporting A-Class model you'd buy if you'd decided that the 218hp front-driven A 250 AMG variant wasn't quite enough. And you'd reasoned that the top A 45 Mercedes-AMG model (which offers either 387 or 421hp) was just that little bit too much. Look at it like that and it does seem as if this A 35 might hit something of a small sports saloon sweet spot.

So here we are with yet another compact car offering 4WD and a turbo engine putting out around 300hp. It's such a familiar recipe isn't it, but this is a popular sweet spot in the shopping rocket market that Mercedes has never properly addressed. The brand claims that the A 35 is much more than just a warmed-up version of a company rep's A250. True, it does share the same basic 'M260'-series 2.0-litre engine as an A250 but to that unit, the Affalterbach engineers have added a twin scroll turbocharger that boosts power to 306hp and enables 62mph from rest to be reached in just 4.7s on the way to a top speed that has to be artificially limited to 155mph. For sharp handling, the Mercedes-AMG brand has here installed a faster-reacting 4MATIC AWD system, bolted on sticky Pirelli P-Zero tyres, added in a clever 'AMG DYNAMICS' torque vectoring system for extra cornering stability and made the body and platform of this car far more torsionally rigid. Plus it's included a quicker-shifting SPEEDSHIFT DCT' 7-speed paddle shift auto gearbox set-up featuring more urgent control software and case-hardening for the first three ratios to allow for tyre-smoking starts that'll be aided by a 'RACE START' launch control mode. To get the most from it all, you'll want to play with the various settings of the 'AMG DYNAMIC SELECT' drive mode system.

This four-door saloon is based on a wheelbase of 2,729 millimetres and displays the powerful proportions of a dynamic, and at the same time, compact sedan with sporty short overhangs at the front and rear. The radiator grille with twin louvres; the AMG Line front apron with flics on the air intakes; a front splitter; and silver chrome trim elements are distinguishing AMG design features. In the side view, the aerodynamically optimised 18-inch light-alloy wheels in five twin-spoke design and the side sill panels of the AMG Line catch the eye. The two-part tail lamps and the smart diffuser insert underscore the rear end and emphasise the width. Additionally, there's a spoiler lip on the boot lid and two round tailpipe trims are positioned on the extreme left and right. The customer can choose between three AMG display styles for the instrument cluster. The Supersport mode is particularly striking with a central, round rev counter and additional information presented in the form of bars to the left and right of the rev counter. Obviously, this saloon variant differs from the hatch A 35 variant more in the rear. The roofline isn't so swept back as to limit headroom, while the wide-opening doors allow easy access. Mercedes claims there's class-leading headroom in the back. It'll still be tight for three adults though. The boot, which offers 420-litres of space, is 50-litres bigger than that of the hatch, though has a narrower opening.

The A 35 4MATIC Saloon prices at around £36,500, around £500 more than the hatch version, so it's much more accessible than the faster A 45 model. But most likely buyers will probably want to spend more. The optional 'AMG Executive equipment line' package adds a 10.25-inch media display, heated front seats, a parking package including Active Parking Assist with PARKTRONIC, a leather package and a mirror package including electrically folding exterior mirrors and automatically-dimming driver's side mirror and rear-view mirror. The 'AMG Premium equipment line' package builds on this with a 10.25-inch instrument cluster, ambient lighting with a choice of 64 colours, illuminated door sills, keyless entry, a mid-range sound system and a rear armrest. Push your spend up towards £40,000 and you can have you're A 35 with the 'AMG Premium Plus equipment line' package which, in addition to the pack features just mentioned, adds a Burmester surround sound system, electrically-adjustable front memory seats, a Panoramic glass sunroof and Multibeam LED headlights with Adaptive Highbeam Assist Plus. Go for one of these packages and you'll also be offered an optional 'Driving Assistance package' of camera-driven safety equipment, including Active Blind Spot Assist, Active Braking Assist with a cross-traffic function, Active Distance Assist DISTRONIC, Active Emergency Stop Assist, Active Lane-change Assist, Active Speed Limit Assist, Active Steering Asist, Evasive Steering Assist, Pre-Safe Plus and route-based speed adjustment.

We should mention that the saloon version of this A 35 is fractionally more frugal and cleaner than the alternative hatch variant, even though the sedan is 15kgs heavier; work that one out. The A 35 Saloon manages up to 36.7mpg on the WLTP combined cycle and between 164 and 167g/km of CO2. As you'd expect, these figures place the A 35 model series mid-way between its two A-Class hot hatch stablemates. An A250 manages up to 41.5mpg and 139g/km, while the top A 45 AMG model delivers 34.0mpg and 189g/km of CO2. So what's been done with the engineering of this car to promote running cost efficiency? Well, Mercedes says that the 2.0-litre engine's twin scroll technology reduces exhaust gas back pressure, thereby improving gas exchange and engine efficiency. Other engineering measures that help in this regard include CAMTRONIC variable valve control, intelligent thermal engine management, high-precision piezo injectors, multi-spark ignition and patented 'CONICSHAPE' cylinder honing that reduces internal engine friction. Unlike an A250, the A 35's 'DYNAMIC SELECT' driving mode system doesn't feature a frugal 'Eco' setting but if you keep this car in its 'Comfort' mode, the auto gearbox will upshift itself earlier to promote frugality. Plus in the 'Comfort' and 'Slippery' modes, an ECO start/stop system will be activated to cut the engine when you don't need it, stuck in traffic or waiting at the lights.

There's lots to appreciate here. We like the fact that you can choose either a subtle or an overtly sporty look; obvious rivals usually restrict you to either one or the other. And the A 35 comes with a couple of things that'll really sell this car to you in the showroom and on the test drive; the most sophisticated cabin in the sector and a sports exhaust with aural fireworks that could give a trip to the dry cleaners something of the feel of a lap of Silverstone. Which compensates somewhat for the rather over-firm ride and pricing which might cause something of a sharp intake of breath, once you've specced this car up as most buyers would want. In summary, if you want a really quick small saloon that's a bit less straight-laced than the usual premium badged offerings in this segment, then you'll probably like the A 35 a lot. It's a Mercedes. And it's a lot of the things a car like this should really be. For us, that's an appealing combination.