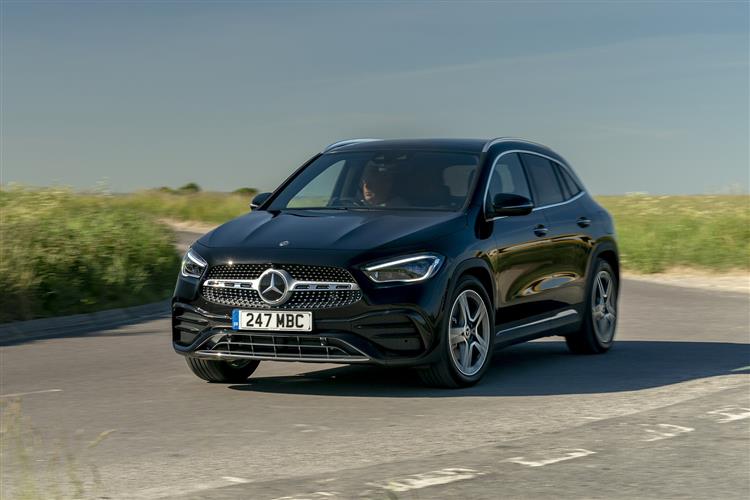 This second generation GLA model redefines what a compact Mercedes SUV should be, thinks Jonathan Crouch

Mercedes has one of the widest ranges of SUVs available and the line-up starts with this GLA model, this being the second generation version of this design. It competes in the premium part of the SUV 'C' sector and, like all models in this segment, is based on family hatchback underpinnings, in this case those of the fourth generation version of the Mercedes A-Class. The original MK1 'X156'-series Mercedes GLA, launched back in 2014, won't go down as one of the more remarkable models in the Stuttgart brand's history but it sold well, shifting nearly a million units over a six year production run which ended with the introduction of this second generation version in early 2020. This 'H247'-series car is the eighth Mercedes model to be spun off the brand's current compact car 'MFA2' platform.

In its mainstream guises, the GLA is available with a choice of three petrol and two diesel engines. The entry-level models, the GLA 180 and the GLA 200, both use a 1.3-litre four-cylinder petrol powerplant with respective outputs of either 136 or 163hp, both units mated to 7G-DCT seven-speed automatic transmission. All other engines use the brand's 8G-DCT eight-speed auto gearbox. The GLA 250 uses a 2.0-litre petrol engine which can generate up to 224hp and 350Nm. There's also a clever GLA 250 e petrol plug-in hybrid which uses a little 1.33-litre four cylinder engine mated to a 15.6kWh lithium-ion battery for a total output of 218hp and a WLTP-rated EV driving range of up to 37 miles. The diesels use the company's usual 2.0-litre unit, which develops either 150hp in the GLA 200d or 190hp in the GLA 220d, the latter featuring a re-engineered version of the brand's 4MATIC 4WD system. With that 4MATIC set-up, you get an 'Off-road Package' which adds an off-road headlight function and an extra off-road driving mode called Downhill Speed Regulation. There are two performance-orientated Mercedes-AMG variants, both using engineering we've already seen in the A-Class. The GLA 35 4MATIC offers a 306hp 2.0-litre petrol turbo engine mated to AMG SPEEDSHIFT DCT 8G dual-clutch auto transmission. And the GLA 45 4MATIC+ S flagship variant uses an engine more bespoke to AMG, a tuned 2.0-litre unit putting out 421hp. So the oily bits are generally pretty familiar; as is most of the other engineering on offer here. The suspension features McPherson struts up front and either a torsion beam or multi-link arrangement at the rear, plus variable damping control is optional. Cornering traction should be aided by a track width increase of 46mm.

There's a bit more of a 'want one' factor with this second generation GLA thanks in part to the fact that its proportions and stance are more clearly defined than its predecessor. The car measures in at 4,410mm long, 2,020mm wide and 1,611mm high, making it 14mm shorter and 2mm narrower, but 104mm higher than the previous model. Larger wheel arches accommodate rims ranging from 17 to 21-inches. Inside, as expected, this 'H247'-series GLA switches to the same cabin layout as has featured in all other recent compact Mercedes models, featuring a dashboard with a free-standing digital display panel. With standard models, this gives you two 7.0in screens - one in front of the driver for the instruments and a centre-dash one for the infotainment functions. Pay extra and you can have both these displays uprated to 10.25-inches in size. The monitors are operated via Mercedes' MBUX operating system, which supports both touchpad and voice control. To give more of a crossover feel, the front seats are positioned 140mm higher than in the A-Class and there's 22mm more head room up front than in the original GLA. That previous car was a little cramped in the back: this one's better, thanks to a 30mm longer wheelbase, though a little disappointingly, rear head room has been reduced by 6mm. Out back, the quoted cargo capacity figure has fallen a little over the previous model - to 435-litres. The GLA 250e PHEV variant, due to under-floor battery placement, has even less room - 385-litres. Even here though, something like a folded baby buggy should easily fit.

Just how much are you prepared to pay for a really premium experience from your compact SUV? Well GLA pricing is going to put that to the test. From launch, this MK2 model was priced from around £32,000, but the GLA variant you're likely to want is almost certain to be in the £35,000 to £40,000 bracket - possibly more. If it's a GLA 250e Plug-in variant, it'll be £40,000 upwards. And if you want one of the Mercedes-AMG GLA 35 or GLA 45 S 4MATIC high performance versions, think more like £45,000-£65,000. In the conventional range, there are six trim levels - 'Sport', 'Sport Executive' and four different flavours of 'AMG Line' - standard, 'Executive', 'Premium' and 'Premium Plus'. All GLA models have to be had with auto transmission - which is a 7G-DCT 7-speeder with the base 1.3-litre petrol engine: try and find the extra £1,500 necessary to upgrade from the base 136hp GLA 180 model with this unit to the perkier 163hp GLA 200 variant. The next stage up in mainstream GLA ownership is to go for one of the 2.0-litre engines, all of which are paired to an 8G-DCT 8-speed auto. The two base 'Sport' models include the option of the GLA 200d variant, which gets the brand's now-familiar OM654 diesel in a 150hp state of tune. Start your search from mid-range 'AMG Line' trim though - as most GLA customers do - and your choice of 2.0-litre options widens to also include the GLA 220d 4MATIC, which uses the same diesel engine uprated to 190hp and mated to 4WD. Or you can have the front-driven petrol-powered GLA 250, which offers 224hp and is really rather quick.

Let's get to the WLTP-rated figures, which see both the GLA 180 and the GLA 200 returning 151g/km of CO2 and respective combined cycle fuel figures of 41.8 and 42.8mpg. Amongst direct rivals, these readings are good enough only to shade the rival Volvo XC40 T3 auto - and that's only because that Swedish contender is nearly 100kgs heavier. If you want to do better with a conventional powerplant, this GLA's much improved OM654 2.0-litre diesel unit beckons, capable of up to 53.3mpg on the combined cycle and up to 140g/km of CO2 in 150hp front-driven form; and 49.6mpg and up to 148g/km in 190hp 4MATIC AWD guise. If you want to do better, you'll need the GLA 250e plug-in hybrid petrol model, which can put out WLTP-rated CO2 emissions of just 32g/km, record an official 2018.8mpg combined cycle fuel figure and can be charged from a 7.4kW wallbox in just 1 hour and 45 minutes. We'll also brief you on the performance figures achieved by the more performance-oriented 2.0-litre petrol GLA models. The 224hp GLA 250 manages up to 36.7mpg on the combined cycle and up to 172g/km. For the 306hp Mercedes-AMG 35 4MATIC, it's up to 34.0mpg and up to 189g/km; and for the top, wild, 421hp Mercedes-AMG 45 S 4MATIC+, it's up to 29.7mpg and up to 215g/km. What else? Well, residuals will be strong, providing you don't go mad on the options list. As you'd expect, the Mercedes after-care package is comprehensive, with a three-year unlimited mileage warranty that's notably better than the restricted three year / 60,000 deal that rivals Audi offer. Most owners will also want to take advantage of a 'Service Care' option that spreads the cost of routine servicing, guaranteeing the price of parts and labour for up to four services and covering the cost of all recommended service items such as brake fluid, spark plugs, air filters, fuel filters and screen wash. As mentioned elsewhere in this film, the 'Mercedes me' connect services package comes with a self-diagnostic feature, enabling it to monitor wear and tear items and alert your local dealer to let you know if something needs seeing to.

The GLA competes in a very different market today to the one it was launched in back in 2014 and this second generation model will offer stiffer opposition to key rivals like the Audi Q3, the BMW X1 and the Volvo XC40. That's primarily because it's improved in the two main areas the old model fell a little short. That car looked a little unremarkable and it was a little cramped in the back. Both those issues have been thoroughly addressed here. Plus it'll be of considerable importance that this car - in its plusher forms anyway - has been equipped and finished with a silken thoroughness typical of the Three-Pointed Star. And in summary? Well every compact SUV in this class claims to take concept of sense and sensibility and add to it something of an adventurous streak. This GLA does that too, but with a bit of extra polish. We can see why you might like it.