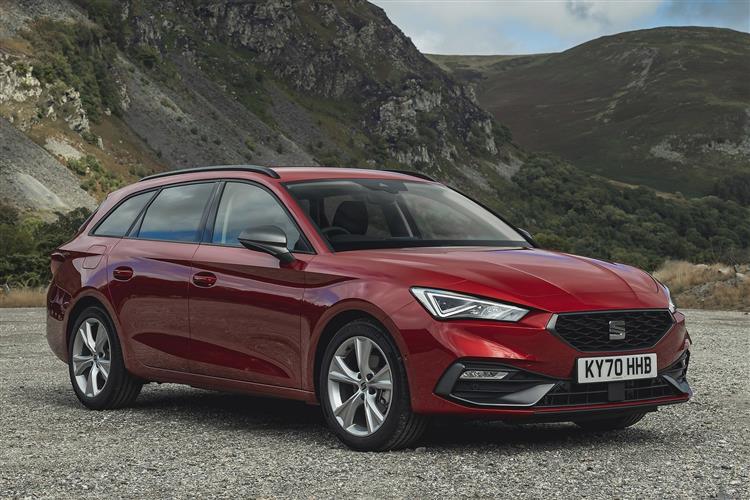 SEAT's now fourth generation Leon is also offered as an Estate. It might be the best car you'd never heard of. Jonathan Crouch reports.

So to the SEAT Leon ST, a compact estate that isn't that compact. A sensible station wagon that claims to be sporty. A car of contradictions then, but one that promises to be quite appealing family transport, especially in the fourth generation form we look at here with its slicker looks, stronger safety and improved media connectivity. Practical and sporty, it aims to offer a more dynamic option to family estate buyers, with a 'lifestyle' appeal that might even pique the interest of folk looking at Qashqai-class crossovers. That's what SEAT says anyway. Time to look at this car in a little more detail.

You might not be surprised to learn that this Leon Estate offers a very similar driving experience to that of its hatchback stablemate - which wasn't guaranteed given the fact that this variant must carry along so much extra length behind its rear axle. With this fourth generation Leon, most mainstream versions continue to persist with an old-school torsion beam rear suspension set-up. Which isn't to suggest that nothing has changed here. Quite the contrary. Take the engine range. Specify an auto gearbox with the 150PS 1.5-litre TSI EVO four cylinder petrol powerplant and you'll get the brand's latest 'eTSI' mild hybrid electrified technology. There's also now a PHEV full-Hybrid plug-in Leon Estate, the e-HYBRID, which uses a 150PS 1.4-litre TSI petrol engine mated to a 6-speed DSG auto gearbox and an 85kW electric motor, powered by a 13kWh lithium-ion battery that when fully charged can deliver a WLTP-rated all-electric driving range of up to 36 miles. Most Leon customers though, will be wanting an engine of the more conventional kind, which if you want to stay with manual transmission is what you'll have to have. With a stick shift fitted, you can choose between conventional 130 or 150PS versions of that 1.5 TSI EVO petrol unit. You'll also be offered the option of diesel power - there are two versions of the latest cleaner, more efficient VW Group 2.0 TDI 'twin dosing' unit, offering either 116 or 150PS. At the top of the range lies the CUPRA Leon fast Estate variant, which features a conventional 2.0-litre TSI petrol unit developing 310PS via 4WD.

Thanks to this Leon Estate, nobody, SEAT says, now needs to have to compromise in their choice between a sporty car and a practical one. That may be over-stating things a bit but it's true that this is one of the more dynamic shapes in the family estate segment. To create it, the Spanish designers have had to compromise a little on ultimate carriage capacity: without the smartly angled rear screen for example, you could certainly fit a bit more in, but then the car would look a little more boxy and boring. We're guessing that most potential family buyers would rather sacrifice a few cubic inches for a more assured driveway statement. SEAT says that visual style was one of the key reasons why people bought the earlier version of this car, so that's been focused on here, hence the sharper, more assertive lines of this fourth generation design which is 93mm longer, 16mm narrower and 3mm lower than before. Full-LED headlights feature at the front and there's a more distinctive full-width 'coast-to-coast'-style lamp arrangement at the rear. Inside, the redesign centres around the use of SEAT's 'Digital Cockpit' layout, which brings together a high-resolution 10.25-inch configurable driver instrument cluster and 10-inch infotainment system. Interior light is an important feature here. It includes a wraparound dashboard light that covers the fascia's entire width and continues through the doors. A key change is the improvement in rear seat space (a slight failing of this model line previously); a 50mm increase in wheelbase has usefully improved legroom. Raise the sloping tailgate and you'll find a 617-litre boot that's 30-litres bigger than before.

Initially, the ST estate is priced mainly in the £22,000 to £28,000 bracket, so you're looking at a premium of around £1,000 above the five-door model. To begin with, customers get a choice of three core trim levels - 'SE', 'SE Dynamic' and 'FR'. If you can afford more, you can talk to your dealer about further 'FR Sport', 'Xcellence' and 'Xcellence Lux' trim levels. Even base 'SE'-spec gets you quite a lot: 'Kessy Go' keyless start, full-LED headlight technology with automatic high beam and 16-inch alloy wheels, plus an eight-inch centre-dash infotainment screen with SEAT Connect technology and access to the 'Apple CarPlay' or 'Android Auto' media systems. 'SE Dynamic' mid-range trim upgrades you to the SEAT Digital Cockpit package, which gets you a 10.25-inch digital driver instrument binnacle display, plus a larger 10-inch centre-dash infotainment screen with navigation. Plus at this level, you get Park Assist (front and rear sensors) and tinted rear side windows, as well as larger Dynamic 17-inch alloy wheels. To make your Leon ST really stand out, you'll need one of the meaner-looking 'FR' trim levels, which add sporty front and rear bumpers, Dynamic 17-inch alloy wheels, dual exhaust pipes and a unique suspension set-up that gives a 15mm lower ride height. 'Xcellence' trim adds luxury touches like microsuede cloth upholstery and Predictive Adaptive Cruise Control.

It's not easy to cut back the weight of a modern family estate in a market where buyers want their cars to be safer and more heavily equipped. Yet thanks to the installation of the Volkswagen Group's MQB platform, this SEAT manages to be singularly impressive in its lack of bulk. An entry-level 1.0 TSI Leon ST is one of the lightest cars in its class. Lots of work's also been put into engine efficiency here. The standard 1.0 and 1.5 TSI petrol units feature a Miller-cycle combustion process and variable geometry turbocharger, along with integrated Active Cylinder Management. The Miller-cycle optimises valvetrain control with early closure of the inlets which, combined with a higher compression rate and turbocharging, better control the air-fuel mixture and improve fuel efficiency by up to 10 per cent. As for the WLTP figures, well for the 1.5 TSI 130PS unit, the readings are up to 51.4mpg on the combined cycle and 124g/km of CO2. For the 1.5 TSI 150PS unit, the figures are up to 48.7mpg and 133g/km - or 47.9mpg and 134g/km for the eTSI mild hybrid DSG auto version of this model. Specify DSG auto transmission with either the 1.0 TSI unit or the 150PS 1.5 TSI EVO engine and as mentioned above, you get the brand's Mild Hybrid eTSI tech. This technology uses a 48V starter-generator and lithium-ion battery enabling the vehicle to coast with the engine switched off (while retaining all key electric functions, such as power steering), harvest energy under deceleration and provide electrical torque assistance during acceleration. If you want to go further, the Plug-in eHybrid model's 1.4-litre TSI engine is paired to a 13kWh battery pack which can be fully charged in 3.5 hours and offers up to 38 miles of electrified range.

Once upon a time, not so very long ago, estate cars were purely for estate people - those with dogs, photocopiers to cart about and weekend leisure equipment. You wouldn't really consider one if you didn't actually need to. But station wagons like this second generation Leon ST are rather different. Why wouldn't you choose one of these rather than a standard Leon five-door hatch? After all, the ST variant isn't much more expensive, looks just as good, drives just as well and offers a lot more everyday flexibility Like the best of its family hatchback-based competitors, it's also successful in offering nearly all the practicality in a larger estate car with the easy parking and deft manoeuvrability of a much smaller one. Is there really any point in considering a five-seater compact SUV or MPV when a car like this SEAT can be so versatile? Your call.