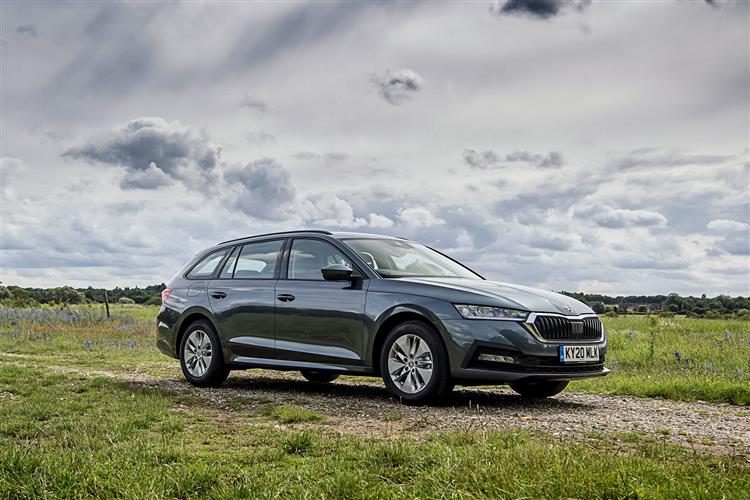 Do you really need a small estate car? The whole purpose of an estate car is its easy load lugging ability and to choose a small one is a bit like choosing a slow supercar or an ugly coupe; it pretty much defeats the initial point. But if you want a new car, you've to keep to a budget and fancy a station wagon over an SUV, going for a decently-sized Mondeo or Passat-class estate costs serious money these days. Which you might think would leave you needing to look at a late, low mileage decently-sized estate rather than something new. Before you do that though, check out the car we're looking into here, the latest MK4 version of Skoda's Octavia Estate. It might just surprise you.

The powerplant range here has a familiar look if you're familiar with Skoda's borrowed Wolfsburg-sourced engineware. Volume sales are based around either a 2.0-litre TDI diesel engine, offered in either 115 or 150PS guises. Or the brand's usual 1.5 TSI EVO 150PS petrol powerplant, which gets the brand's 'e-TECH'-branded 48-volt mild hybrid engine tech when mated to DSG auto transmission. You can also talk to your dealer about an entry-level 1.0-litre three cylinder 110PS petrol unit, which in DSG auto form, also gets that mild hybrid technology. The top vRS sporting model offers two conventional engines, a 245PS 2.0-litre TSI petrol unit and a 200PS 2.0 TDI diesel, the latter available with the option of 4WD. If you want an extra does of electrification, the Octavia model line offers two plug-in hybrid 'iV' model options. This powertrain is offered in 204PS form or, with the sporty vRS iV, in uprated 245PS guise. Like its predecessor, this MK4 Octavia uses the Volkswagen Group's MQB front wheel drive and All-Wheel Drive platform, but in this case the revised version of it that recently debuted on the new-era MK8 Volkswagen Golf.

The Estate body style measures in at the same 4.69m length figure as the equivalent hatch, which makes this latest version 22mm longer than its direct predecessor and 15mm wider. That means 30-litres more boot space and more generous passenger room. Actual boot capacity is therefore bigger than ever - 640-litres is claimed before you start folding seats. If you do that, then 1,700-litres of space can be freed up. Visually, you'd certainly recognise this as an Octavia Estate if you'd owned one before, but the car now looks a little more mature and sophisticated and features full-LED headlights as standard. LED lighting also features in the wider, thinner rear lamps. Where work was needed on this model line though, was in the cabin. Skoda interiors have always been smart and functional but a little dull. This one could almost fool you that you were sitting in a VW Passat Estate, which is another way of saying that quite a big step forward in perceived quality has been now made. Softer-touch plastics, much more chrome trim and configurable LED ambient lighting all now feature and the new two-spoke multi-function steering wheel looks smart too. As is the current fashion, a digital instrument binnacle display is available, this one 10.25-inches in size. It's complemented by your choice of centre-dash screen; there are four choices, a base 8.25-inch monitor, then, if you can afford more, three 10-inch displays of varying functionality.

If you're anything like most, you'll probably be shocked at the prices of new cars. This is a time when Vauxhall can charge you up to £26,000 for a Corsa and still keep a straight face and as such, the fact that you can buy a Skoda Octavia Estate for a starting figure beginning at not much more than £20,000 seems extremely reasonable. Positively generous in fact. Okay, so that'll mean the entry level engine and trim, but even that includes quite a lot these days. For the time being, the core trim level is 'SE Technology' and pricing sits primarily in the £23,500-£25,000 bracket. Plus there are also 'SE First Edition' and 'SE L First Edition' launch variants. Whichever trim level you opt for, as usual, there's a premium of around £1,000 if you want this estate rather than the five-door hatch. As usual with a Skoda, all variants get as standard a range of practical 'Simply Clever' features. In this case, that means a helpful AdBlue nozzle for diesel variants and familiar touches like an ice scraper secreted in the fuel cap and a ticket clip on the driver's side A-pillar. If you've more to spend, a 'Sleep package' can be added that'll give you more comfortable rear seat head rests, stowed blankets and sun blinds. Other extras include massaging front seats, a head-up display and Matrix LED headlights that adapt to the road and other vehicles. As you'd expect, camera-driven safety kit provision has taken a step forward. The brand's 'Collision Avoidance Assistance' autonomous braking system is, as expected, standard right across the range, along with lane departure warning featuring steering assistance and predictive cruise control, which works alongside an updated traffic sign recognition set-up. If you specify your car correctly, you'll find that the cruise control set-up can combine with Skoda's 'Lane Keep Assist' and 'Traffic Jam Assist' systems to provide for a degree of semi-autonomous driving.

You'll be wanting the WLTP emissions figures that'll determine this car's tax status. For the manual 1.5 TSI petrol, it's 130g/km. For the 2.0 TDI 115PS diesel manual, it's 118g/km. For the 2.0 TDI 150PS auto, it's 123g/km. The e-TECH system that features on Octavia 1.0 and 1.5 TSI petrol models fitted with DSG auto transmission is of course the same one we're increasingly seeing on various VW Group models. To recap, it pairs a 12-volt belt-driven starter motor with a small 48-volt lithium ion-battery, which stores energy that's recuperated under braking. The setup assists the petrol engine with a small electric boost, while also enabling this Skoda to coast with the engine completely disengaged at speed on the highway, improving efficiency and reducing CO2 emissions. Don't get your hopes up too high though, as to the effect all of this will have on your running costs. Experience with equivalent Audis has shown us that it doesn't make an enormous amount of difference. If a difference is what you want, then what you need is the Octavia iV (apparently the letters referenvce 'innovative car'), which is the brand's first plug-in model in this segment. Here, a 1.4 TSI petrol engine combines with an e-motor fed by a 13kWh lithium-ion battery pack and, when the cells are fully charged, will enable an Octavia iV to travel for a WLTP-rated all-electric driving range of 34 miles.

There aren't too many cars that have improved their appeal quite as markedly as this fourth generation Skoda Octavia estate. Yes, it's more efficient, better built and better equipped, which are all decisively good things. But the key to this car's big draw is simple. It's much bigger than before but the prices haven't taken a sharp climb. The Octavia was already one of the best value cars in the family hatchback station wagon sector. It's no longer really in that sector but now gives cars like the estate versions of the Mazda6 and the Ford Mondeo a real headache. The best value is to be had at the entry-level end of the Octavia Estate range. At the top end of the line-up, it's easy to see many trading equipment for badge equity and defecting to Volkswagen or Audi products, but given that they're all built by the same group, that might not be such a bad thing. Not so much if the money was going to BMW or Mercedes though. As it stands, this is a solid seven out of ten car. You'll love it.